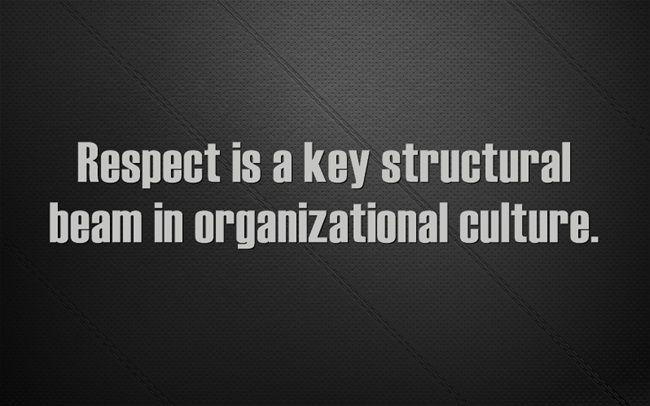 I believe that respect is a key structural beam supporting the organizational “house.” Without it, trust falls, productivity falls, engagement drops and turnover increases. It becomes harder to attract top talent for open positions in organizations where respect is not a minimum standard. Without respect, an organization’s culture becomes structurally unsound and devolves into “a house of cards” at risk of many negative impacts beyond those mentioned here.

By requiring respect as the MINIMUM standard, we are creating a preventive and protective shield that protects the organization’s culture.

Think of what happens to a house when a structural beam is removed. It collapses in on itself. That is what begins to happen to organizational culture the moment a single word or action that is disrespectful is “approved” through silence. Why is silence considered approval? Thomas Paine famously said “A long habit of not thinking a thing wrong gives it a superficial appearance of being right.” When leaders look the other way, they are on the path to making a disrespectful act appear “right” whether that was intended or not. Granted, talking about respect is difficult and we don’t have clear instructions for how to build a culture of respect. Or do we? Stayed tuned for Respect, Interpreted Part 2.